Brewing of beer is perhaps as old as bread-making. It has also been important not just in the food industry but even in mythology and literature. The “Hymn to Ninkasi” contains the oldest recorded recipe for beer and even Noah kept a stock of beer on the Ark. Beer has been popular for thousands of years, but when Louis Pasteur discovered the benefits of yeast in fermentation, beer brewing became easier and faster.

Let’s get to know this popular beverage.

Ingredients
Different cultures used different types of grains. The Babylonians alone had twenty beer varieties. Egyptians cultivated barley for beer-making, while the Russians used rye. North Americans used persimmon and agave, while South America had corn and sweet potatoes. Africa used cassava, corn and millet. Japan made use of rice, while China had wheat. The rest of Asia on the other hand used sorghum.

The important ingredients in any type of beer however are water, starch, yeast and a flavoring.
1. Water – Water from different sources contain minerals that are sometimes unique to the region.
2. Starch – The starch source refers to the material that will be fermented. The most common is the malted grain which was soaked in water to allow the grain to germinate.
3. Yeast – Yeast is used for the fermentation of the starch source which contains sugar. It metabolizes the sugar to produce carbon dioxide and alcohol.
4. Flavoring – The most common flavoring used since 1000 AD is hops, the flower of a hop plant, for its bitter and citric taste. 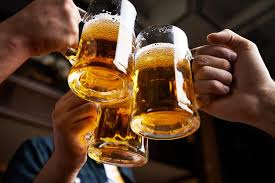 Brewing
Brewing, or beer-making process, has two steps. The first step involves converting the starch source such as a grain into a wort. A wort is the result of mixing the grain with hot water and then heated. The process is called mashing. The heat converts the starch into sugars.

The wort, which is in a liquid form, is then boiled to remove the water and some enzymes still present. Hops are added during this process too. The wort with hops is cooled before it’s fermented.

Fermentation with the help of a yeast converts the wort into an alcoholic beverage. It takes weeks or months depending on the type of yeast. The yeast will settle once fermentation is done. Sometimes a beer goes through two fermentation processes to make it last longer. 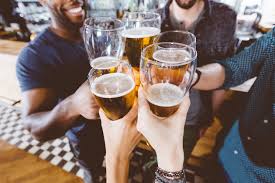 Styles
Beers are classified according to the type of yeast used and the fermentation process.

1. Ale
Ale is fermented for a short period at warm temperatures. The yeast used is called top-fermenting yeast because it floats during fermentation. Ales have been brewed since ancient times. Sub-types of ale include the pale and brown ales.

2. Lager
Lager is fermented for long periods at cold temperatures. The yeast used are called bottom-fermenting yeast because they sink while fermenting. Pilsners and dark lagers are two types of lager.

3. Others
Hybrid beers employ techniques in creating both ale and lager. The brewing process for example might use lager yeast while fermenting at a warm temperature. Specialty beers on the other hand are made from other types of ingredients.