Whether your partner has been in a month-long affair or is making out with someone else, getting cheated on really hurts. Still, that doesn’t mean that your relationship no longer worth salvaging. In fact, a couple therapist in Singapore revealed that many couples tend to develop stronger connections after facing an infidelity issue.

However, there are still some things you should avoid doing to keep yourself from sabotaging your efforts to rebuild your relationship – and some of those things are as follows:

You may be tempted to act like nothing happened later on, but doing so will only keep you from addressing any underlying issues in your relationship. Understanding the meaning behind his infidelity is crucial as it often reflects the individual’s satisfaction in the relationship. Perhaps it was just a one-time moment of weakness on your beau’s part, or is an attempt to find something that he thinks is missing in your relationship. Either way, realizing the issue behind it will help in bringing you closer and avoiding the same problem from happen again.

Your partner’s infidelity isn’t your fault. You didn’t deserve it and you’re not responsible for his actions, so stop beating yourself over the person’s bad decision. However, that doesn’t mean that you shouldn’t also consider understanding and meeting his needs if you want to save your relationship. Knowing why such thing happened and understanding your role in it will surely help in empowering both you and your relationship.

Sure, trashing your unfaithful partner on social media – or cheating on them as well – might make you feel better for a moment, but thinking about evening the score with him won’t help in resolving the issue. In fact, it would just worsen the situation. Right now, what’s important is that you both do what you can to make the other feel that you’re in the same team again.

Your significant other’s betrayal could hurt you for a long time, so learn to be patient with yourself and let him know that he needs to be patient with you as well. It’s important for him to understand that you’re devastated and that it could be difficult to put things back together. You’ll eventually realize that you need to make major changes in your relationship, but for now, don’t rush yourself.

Trashing or getting even with your partner might seem like the best thing to do after discovering his infidelity, but doing it won’t really bring any good to either your relationship or your well-being. Instead, carefully process the situation and let yourself heal at your own pace. 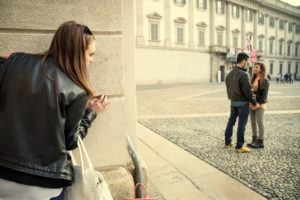